We refer to this comment to our post on Bluetooth alphanumerical codes being generated by vaccinated individuals:

To recap, we had previously debunked claims of microchips being found in the COVID-19 vaccine, with the University of Nebraska Medical Center noting that even the smallest microchip available is far too big to fit inside an immunization shot.

According to the allegation however, there are chips made of ‘graphine (sic) oxide’ which are nanometer sized and can presumably be transmitted through the vaccine.

When we conducted a search on graphene oxide being present in the COVID-19 vaccine, we found that many publications had already conducted a factcheck on this claim in the past, debunking the allegations as misinformation.

A check from Agence France-Presse (AFP), a French news agency that has a global fact-checking operation quoted Dr Park Jong-bo, a researcher at Biographene, a company that develops graphene-based medicine, who described the claim as misleading, with no vaccines on the market being based on graphene oxide. Additionally, the published ingredient lists for both the Pfizer and Moderna vaccine by the European Medicines Agency (EMA) are publicly available, with neither of them containing graphene oxide. 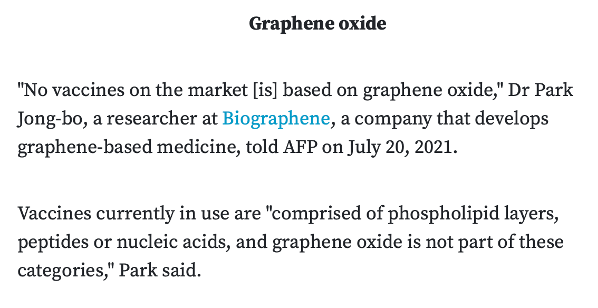 Medical experts have noted that graphene oxide might be a useful tool for vaccine delivery in the future, where scientists and chemical engineers believe that it can be engineered to be a safe delivery vehicle for vaccines, protecting the RNA molecules found in mRNA vaccines, increasing their effectiveness by making them more stable. However, “many more studies and trials are needed” to determine whether the compound would be completely safe and effective for biomedical applications.

Therefore, it is false that graphene oxide is present in the COVID-19 vaccine.